"Shoton" in Tibetan means yogurt banquet. As Tibetan operas are performed and Buddha paintings are exhibited at this time, it is also called "Tibetan Opera Festival" or "Buddha Exhibition Festival". Shoton Festival is the most important and attractive for the Tibetans with full of ethnic songs and dances along with famous Tibetan opera performing at Norbulingka Palace. Hundreds of thousands of Tibetans gather at Drepung Monetary,Sera monastery to see the famous Buddha Thangka.

Read more about What’s the meaning of Shoton Festival

Tsongkapa master had initiated a rule on monks to concentrate on meditation in monasteries from April to June according to Tibetan lunar calendar to avoid killings and earning demerits during that days. After finishing these days, the local Tibetan laymen use to serve them curds, perform Tibetan opera and will go for picnics and later strengthen to new festival in Tibet.

Read more about History of Shoton Festival in Tibet

What to See in Shoton Festival 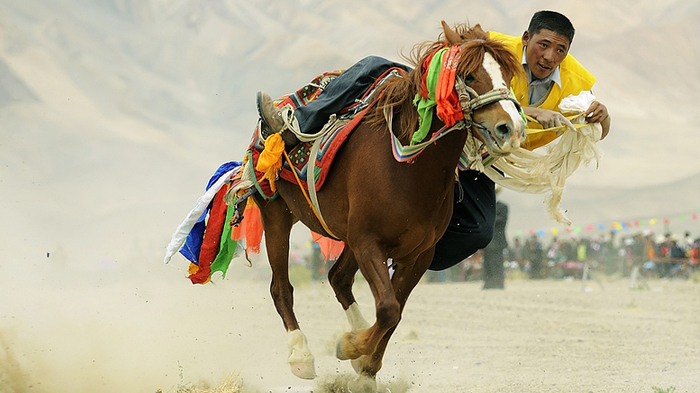 - Hundreds of Tibetan people gather at Drepung and Sera monastery with well ethnic dress up.
- Lamas carrying the giant Jampa Thangka and hanging on foot hill of Gebeiwotse mountain early in the morning.
- The sound of sutra bugle reverberating through the valley.
- Giant hanged Jampa thangka at Drepung and Sera monastery.
- Tibetan opera performance at Norbulingka Palace.
- Woderful yak racing and horsemanship display.
- Hundreds of journalist from all over the world.
- Sangsol (burning of Tuja leaves along with Tsampa and butter) at the whole cities.
- Crowded Tibetan peoples throwing White Khada on the giant Thangka.

Read more at How to Celebrate Shoton Festival.

Shoton Festival is held in midsummer, usually on July 1st of Tibetan calendar and the date is different every year. It has been celebrated on Aug.21st, 2017 and will fall on Aug.11th, 2018 in solar calendar. In fact, it is also the most comfortable travel season in Tibet, when the climate is pleasant and there is more oxygen in the air than other seasons. However, Tibet train tickets, air tickets, hotels, tour guides, vehicles at that time are in great demand because Tibet have already embraced its peak tourism season since April and Chinese students still spend their summer holidays there. Our 2018 Shoton Festival tours are designed in advance to help you make an early plan so as to book train/air tickets and hotels as well as tours as early as possible.

Generally, you can shoot the Tangka unveiling ceremony at Drepung Monastery in the morning and Tibetan opera performance at Norbulingka.

The Tangka unveiling ceremony is normally held around 8:30am in Drepung Monastery, and you can take photos all the morning. You need to rush to Drepung Monastery at 4am in order to shoot the entire process of “Sunning the Buddha”. At around 8:30am, the large Thangka will be slowly unveiled on a special platform, and pilgrims rush up to throw white Hada on the giant Thangka. Countless Hada fly in front of the Buddha forming a great scene. 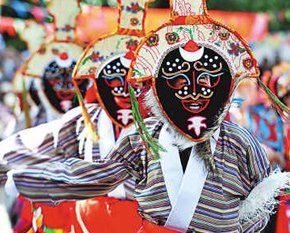 Then appreciate Tibetan opera performance at in the afternoon. Actually, Tibetan Opera is performed from about 11:00 a.m. until dusk every day at Norbulingka and at another park near the Potala Palace. Due to the limited time, the performances are only a distillation of actual Tibetan Opera.

On Shoton Festival, Buddhists will go to mountains to cultivate themselves, and after cultivation, their family members will go and meet them on the mountains. On their way home, they eat yoghurt, sing and dance.

During Shoton Festival, the main activities of the celebration are centered in Lhasa. Take good care of your photographic equipment and avoid them to be damaged by squeezing when there are too many tourists. Keep safe when climbing and shooting.

Restaurant and Accommodation in Lhasa

There are lots of snack stands at the side of highway, which is at the foot of Drepung Monastery. The gate in front of Norbulingka is filled with some food stands, where you can taste local snacks.

It is advisable to reserve a room in advance in Lhasa city, as there may be no room available during Shoton Festival.